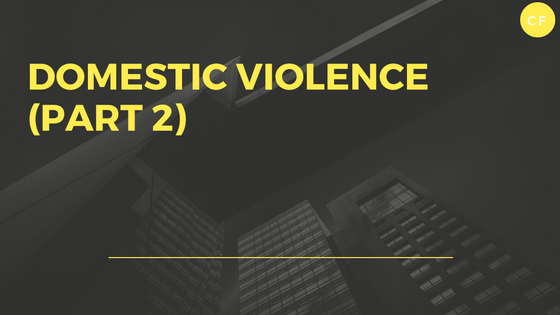 Domestic abuse is a men’s issue. Not to say that women who go through this shouldn’t be heard and empowered, but because as men, we create the climate that perpetuates and supports this issue and it is an issue that we, as men, must be proactive against in order to eradicate.

Last month, the newly named CommUnity Frontline had it’s 4th meeting and LaTasha Jackson-McDougle, the founder of Cheryl’s Voice, was our guest speaker. Cheryl’s Voice was created to be a helping hand to children who are left behind and have suffered the loss of a parent(s) to domestic violence homicide/suicide. The mission and vision of this foundation is to be a voice for these children who will be encouraged to seek a promising future and break the cycle of domestic violence.

There was so much information passed along at this meeting that I can already tell I’ve been educated by and by which I’m beginning to be reformed, that I’ve tried to find just the right moment since the last Wednesday of October, which was Domestic Violence Awareness Month, to type it all out. But as I’m typing this, I’m beginning to realize not just how much information I’m dealing with, but how high the quality of the information is, and therefor how much of a disservice I’d be doing to this cause by trying to put it all out there at once as if I could tie up all these statistics and resources up in a neat bow and all that information could be retained and digested by people and we could end the problem with one post. This will be an ongoing fight I’ll be participating in for the rest of my life.

So instead of dropping everything all at once, my intention to be faithful to this cause will be continuing to post this information for an indefinite period of time. And continuing the talks about the issue until the problem no longer exists. For now, I’ll say that the SafeHaven of Tarrant County’s 24 Hour Emergency Hotline’s number is 877-701-7233. I hope the sinking feeling my heart feels right now by knowing how much more there is to say will lead to some good in our talks about this.

Off to work now.