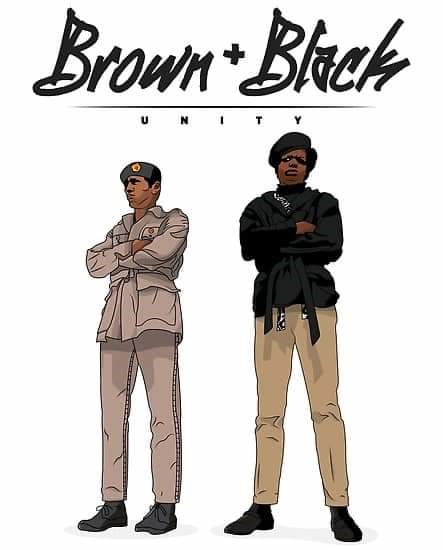 As I watch the media outlets discuss the impact of Covid-19 and hear the President describe efforts to slow down its spread by using “military tactics,” the importance of Black and Brown Solidarity comes to my mind.

For me, it seems that anytime there is a threat to the “American way of life,” the Federal Government will deploy its military tactics to isolate, divide, or otherwise exterminate the threat. Historically, the Federal Government has identified and infiltrated “threatening” organizations, such as the Black Panther Party and Chicano Movements in the ’70s.  The Government-led declaration of the “War on Drugs” in the ‘70s and ’80s, the New Jim (Juan) Crow, internment camps, unsanctioned deportations, and now the “Border Wall” are all Government responses to perceived threats believed to be posed primarily by black and brown people.  Deploying the militarized police force is a testament to how the Federal Government will do “whatever it takes” to destroy the perceived threat, the Black and Brown community. As you read this, I hope that we do not play into the “Oppression Olympics,” instead, we see the centuries old machine that pits us against each other and attempts to hide our potential when working towards solidarity.

The social and political climate in the United States, among progressives and conservatives alike, reveals that the Black and Brown community is the group of least concern. The responses to Covid-19 and its impact on the Black and Brown community from government officials and “mainstream America” makes this very clear. The responses over the recent murders of Atitiana Jefferson, Breonna Taylor and Ahmaud Arbery from government officials and “mainstream America” makes this clear. The responses of government officials and “mainstream America” to children being ripped away from their parents and locked up in cages makes this clear. The common phrase I continue to hear during the Covid-19 shutdown is, “we are in this together.” Are we really in this together, or is this just a marketing slogan to make us feel better and pretend that we are? Both of our communities, black and brown, have and continue to fight the same fight . . . but separately.

Webster’s Dictionary defines solidarity as “unity (as of a group or class) that produces or is based on the community of interests, objectives, and standards.” For me, solidarity across racial lines is so much more than living in the same neighborhoods. To me, it is a form of resistance against the power structures that aim to divide us. It is a collective consciousness that disrupts the status quo for the better and sets the groundwork to overhaul systems and reverse the consequences of unjust acts.

When I, a Brown Chicano, hear about my Black brothers and sisters’ racialized experiences, I often begin to strategize in my mind how to act and stand with them. However, I now realize that I cannot be reactive to this stance and must begin to be proactive by doing my part in speaking out and acting against any form of oppression. I hope that not if, but when, the time comes, my Black brothers and sisters will do the same for my community. I want to be clear; I am not saying this is not happening, I believe it is.  I am saying that, as we navigate different systems, we will encounter various challenges, and when we do, we must be ready to act.

I will close with this verse from a scene in the Chicano classic: Blood in Blood Out.

In a scene, Montana and Miklo are having a conversation about what it means to be Chicano. Miklo claims to be Chicano but feels stuck between his white skin and brown heart. Montana says;

Jonathan serves as an Equity Specialist with the Fort Worth Independent School District. Before that, he was the Coordinator of Intercultural Student Engagement & Academic Success Network at Tarrant County College- South, where he also led the implementation of the Men of Color Collaborative. For the past fifteen years, Jonathan has worked to assist young people and college students in developing racial consciousness by creating spaces for courageous conversations, and other opportunities to learn about the pervasive dynamics of racism, while preparing them for action. Because of his journey, he has developed a strong belief that if racism is left unchecked, society will continue to see an increase of racially charged occurrences that impact success for students of color. Combining his education and lived experiences, from being a high school dropout to now serving as an educator, mentor, advocate, and leader in his community, has prepared him to recognize and confront racism in our educational system and through institutional practices. Jonathan is currently pursuing his doctorate in Organizational Leadership at Abilene Christian University, where he also completed his Master’s in Higher Education in 2015.